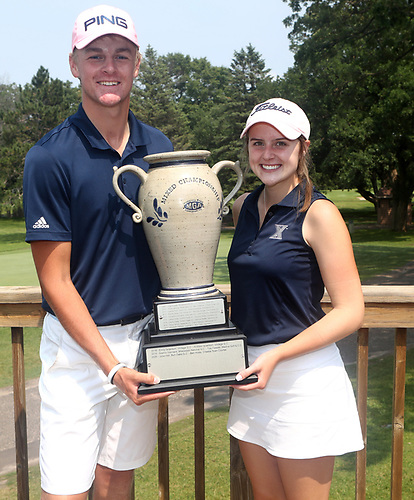 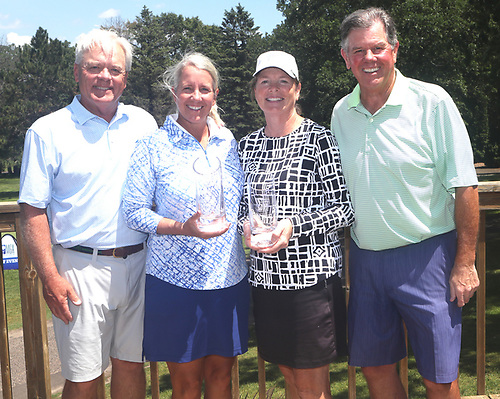 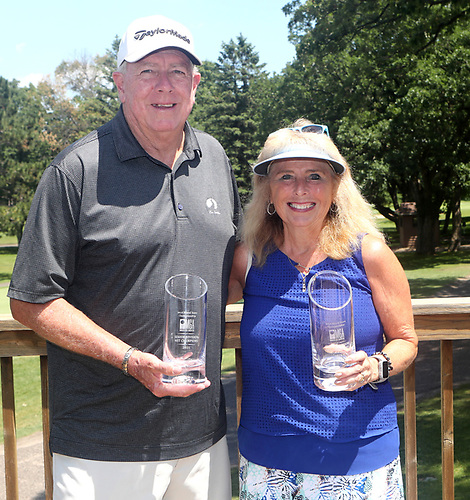 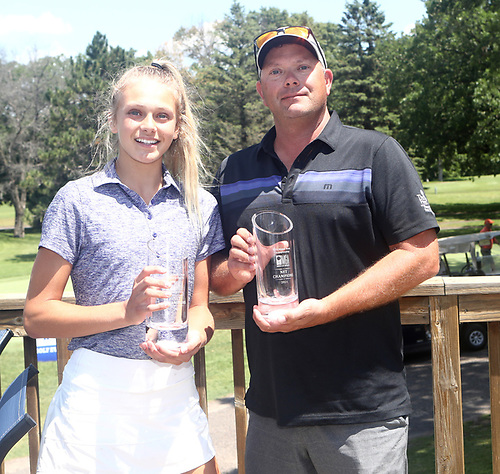 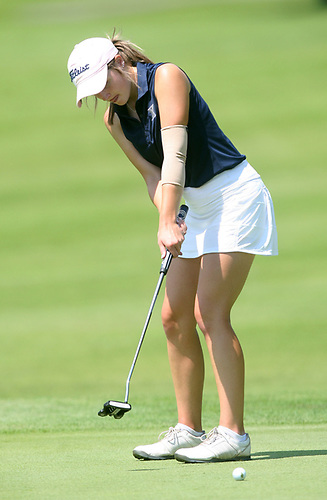 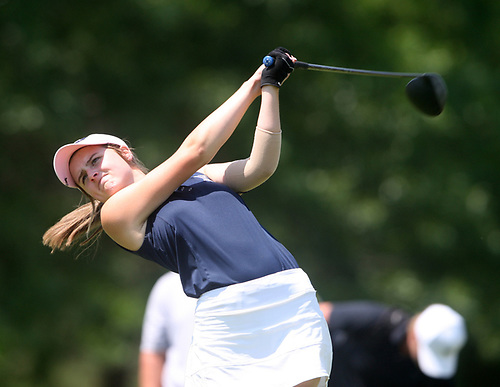 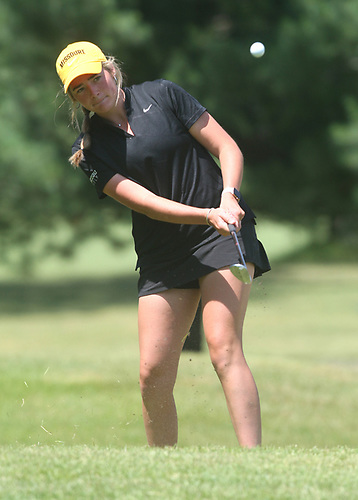 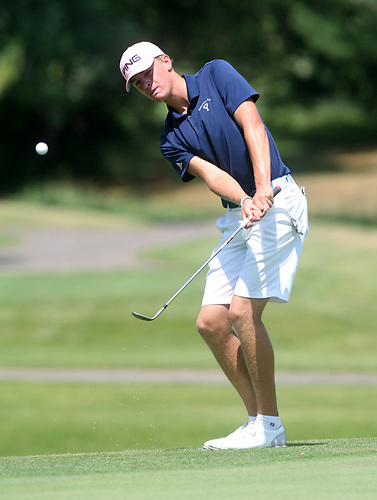 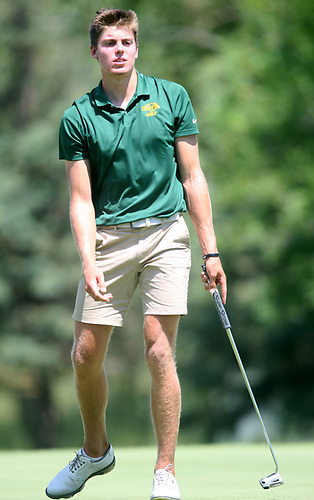 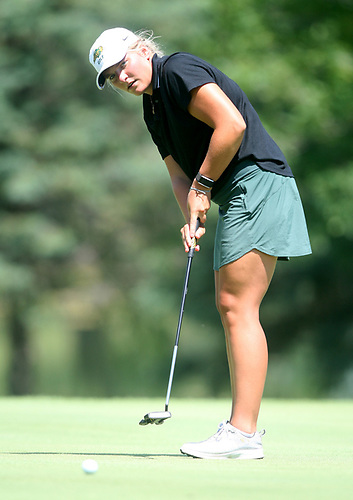 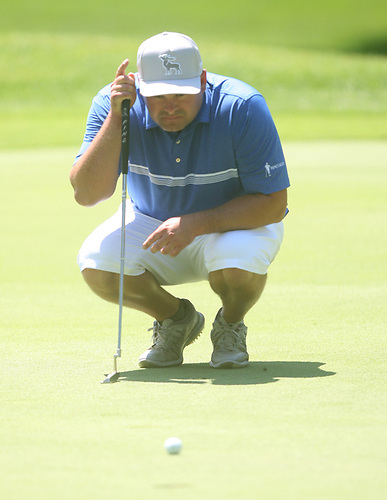 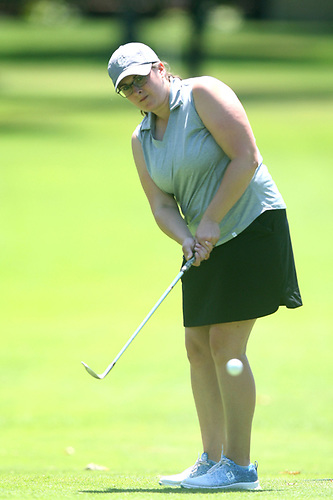 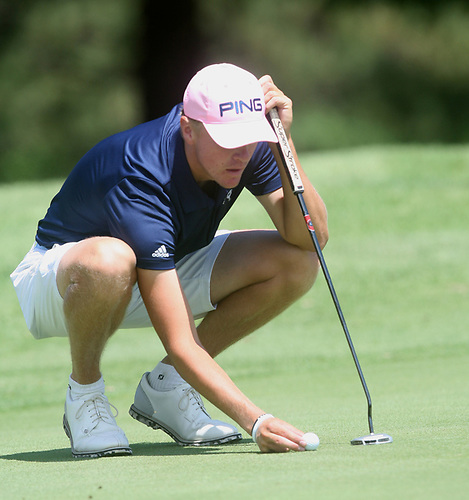 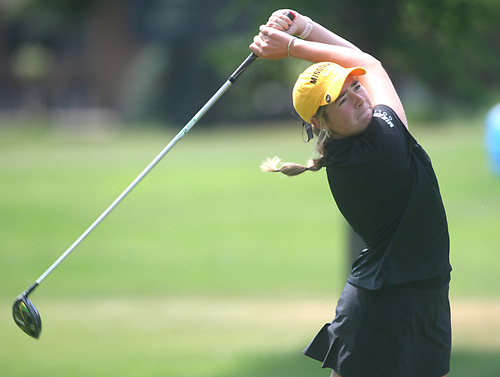 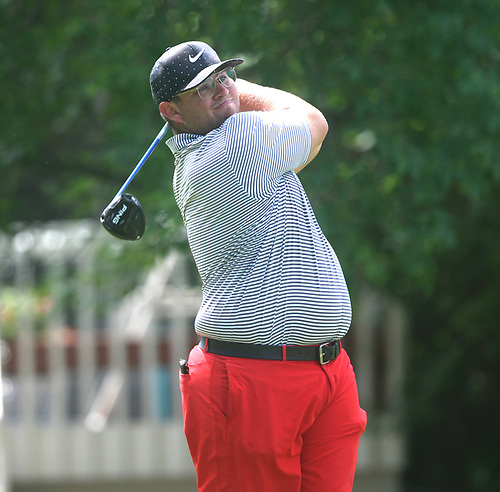 
BECKER, Minn. – The twosome of Sophia Yoemans and Trey Fessler posted an opening-round 65 at Hastings Golf Club to the begin the 2019 Minnesota Golf Association Mixed Amateur Team Championship with a one stroke lead, eventually holding off Leah Herzog and Cecil Belisle to claim the championship the following day.

On Tuesday Yoemans and Fessler carded an 8-under 64, but this time, will have to catch the team of Emma Welch and Jack Johnson, who finished one better at 9-under 63 to begin the 31st MGA Mixed Amateur Team Championship at Pebble Creek Golf Club.

“We got off to a really slow start,” Yoemans said. “I missed a couple 6-footers early on, so the opportunities were there and we did not convert. After our slow start, we thought 3-under through nine would be good.”

Even par through four holes to begin the day Tuesday, the two some birdied the fifth before Fessler rolled in a short birdie putt at the sixth and a 4-footer to put the pair at 3-under through nine holes.

Despite a wayward tee shot at the 11th, Fessler recovered by wedging his second inside of four feet and converted his birdie chance. Yoemans countered by sticking her tee shot at the par-3 12th to six feet and rolled in a fifth birdie putt for the team before Fessler added a two-putt birdie at the 16th.

After dropping a 25-footer for birdie at the 15th, Fessler and Yoemans each carded one final birdie at the 16th to finish the opening round with a 67 and sit one shot off the lead with 18 holes to play.

Both Yoemans and Fessler agreed that Wednesday’s format change to a Modified Chapman during the final round will suit both golfers.

“We both have a lot of confidence and tomorrow will be a lot of fun because I get to play from the middle of the fairway all of the time," Fessler said, giving a nod to his teammate's consistency off the tee. "The [format] is tough, but it’s fun because it’s something different.”

Welch, who wrapped up her senior season at Lakeville North High School this spring, and her partner Johnson, a soon-to-be sophomore at North Dakota State University, bounced back from an early bogey to turn in 2-under following birdies at the fifth and seventh holes.

Johnson would help his team to 3-under by converting his birdie opportunity at the 10th before the twosome went on an incredible run by holing six consecutive birdies to finish the back nine and post a 9-under 63, putting the two on top of the leaderboard by one stroke.

The twosome of Maddie Herzog and Nate Deziel, both golfers at North Dakota State, bogeyed their opening hole Tuesday, but would scatter four bogeys over the front nine to turn in 3-under. Another four bogeys during the twosome’s inward nine put them into the clubhouse in third place, two shots back.

The two are looking to improve on a fifth-place finish from a year ago where they posted back-to-back rounds of 4-under 68, four shots off the lead.

Amy and Brian Lord posted an opening-round 8-under 64 and will begin Wednesday’s final round in a tie for the lead with the twosome of Dwight and Taylor Post in the Net Division. MGA Women’s Golf Manager Rachel Blauert and partner Kyle Walters will begin the final round one shot back following their 65 to start the championship Tuesday.

Randy and Renee Jacobus took the early lead in the Senior Division with a round of 5-under 67 Tuesday, leading by one stroke over defending MGA Senior Women’s Player of the Year Betsy Aldrich and partner Mark Knutson.

John Anderson and Leigh Klasse will begin the final round with a two-stroke deficit following their round of 3-under 69.

The final round of the 31st MGA Mixed Amateur Team Championship is scheduled to begin at 8 a.m. Wednesday at Pebble Creek Golf Club.